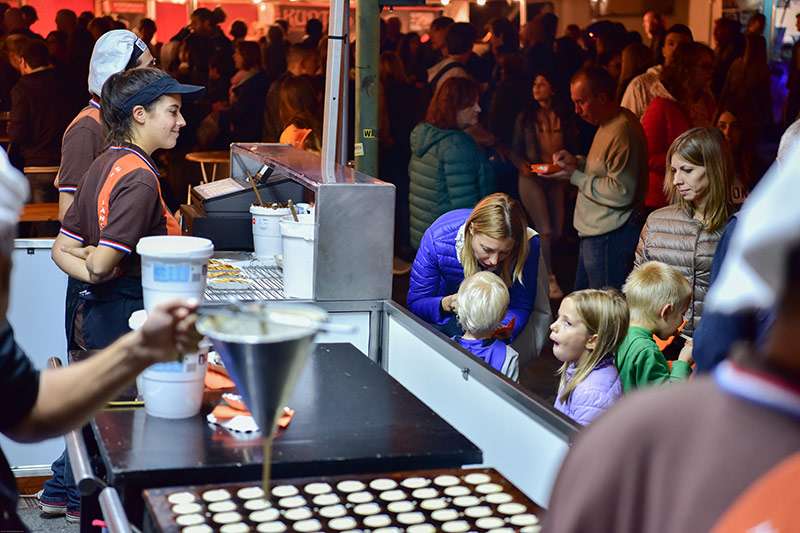 Until October we’re selling our ‘mini crêpes olandesi’ at the European Markets in North and Central Italy.

Because we have been a steady presence at the European Markets of Fiva Confcommercio for years now, visitors love our mini crêpes olandesi con Nutella to such an extent that without us the event wouldn’t be the same. So we’re happy to set up base in a different, often beautiful Italian city in the Middle and the North of the country each weekend until October.

A local newspaper in Empoli recently wrote: ‘Among the desserts, in this international challenge of flavors, the very Italian Sicilian cannoli have “beaten” muffins and macarons, second only to poffertjes, the Dutch mini pancakes that have always caused a “furor”.’ And Martina Nargiso on Instagram: ‘The only thing that can make me smile even when I don’t feel like it’. Sometimes visitors even recognise us as the mini pancakes from Dubai, where we also are very active. Considering the fine food culture of Italy, we consider our popularity a great compliment. Our great success at EXPO2015 in Milan reassured us of this fact and we hope to be active in Italy for a very long time to come.

The whole world comes together at the European Markets organized by Fiva Confcommercio each year from March to October in over 25 cities all over North and Central Italy. Since the first edition in 2001, the event has grown into an exhibition of products from all over the continent, celebrating differences and similarities in culture, bringing together Italian and European market traders and millions of consumers who enjoy the typical national products – food and non-food – of many different European countries, like ‘mini crêpes olandesi’.

Mercato Europeo runs from March to October in over 25 cities in Central and North Italy.